In the Fall of 2009, during my senior year as a student at Evergreen State College, I did a research project on immigration in Grays Harbor County in Washington state. I grew up in this county and knew that demographics were shifting sharply. This blog contains some of my research.

Despite the fact that the harbor is overflowing with
beauty and natural resources, the area is severely
economically depressed. Poverty rates are high (22%
in the largest town, Aberdeen [Jefferson Center]) and
the contrast between the large houses on the hill and
the run down homes on the flats is stark. Homelessness
is rampant, housing prices have slumped, and jobs are few.

Historically, the area was settled in the mid-nineteenth
century, built by the logging boom. The vast forest,
under the management of giant timber companies,
brought a great deal of wealth into the area. The towns
of Grays Harbor were thriving throughout the early
1900s and more and more people settled. The Indian
tribes were moved to reservations after a short period
of unrest and the Chehalis tribe, descended from the
dozen or so tribes that once fished along the rivers
that still carry their names, now make their home on a
small reservation in Oakville while the Quinault nation
was given a larger tract of land to the north.

Most of the forest land in the county is young second
or third growth—the giant logs of yesteryear are
gone. The timber industry began slowing considerably
during the 70s and 80s, and in 1994, when logging
was closed in the national forests, many jobs were lost.
Since the area is so far from the rest of the state
centers and well off the I-5 corridor, few businesses
have been attracted to the area. The large sawmills
have closed one by one, though fisheries on the coast
are still a dominant employer.

There is little opportunity for achievement and little
for the young people to do. The young tend to move
out of the area once they graduate if they can. In some
school districts, there is a high rate of homelessness
among youth. The use of methamphetamines is
prevalent. There is little sign of community activism
and social services can be difficult to obtain.

This is a rural community, not used to change and
desperately clinging to the last remnants of a
disappearing culture of forestry. It is deeply
traditional, even as it is largely a blue county. For
communities like those on the harbor, it takes time to
reconcile to change. People feel powerless and left out
of the processes that are changing their way of life.

The region is generally isolated from the rest of the state
and, in many ways, disconnected and unaware of the
larger changes in both the national and global scene.
Logging culture is unique. Birthed in the turbulent
“frontier days,” it began as a male dominated world of
travelling immigrant men, largely German and
Scandinavian, and tough logging camps. As towns
began to form, the basis for the local culture of the
Olympic Peninsula began (Rose 60-61). Towns had a
strong working class base, fueled by a growing
national demand for timber, and situated their way of
life around the industry. In an article from Seattle
Weekly cited by Fred Rose, it was observed that the
fall of the timber industry represented, not only loss
of jobs, but “the loss of an entire way of life” (Rose
70). The community as a whole has not yet been able
to recover from this loss.

This affects the community response to immigration,
since “conflict between groups, especially racially
different groups, increases in powerless situations"
As immigration has increased, numerous
responses have come from the local community. In
some cases, there has been outright hostility and fear
of job loss. This paper will document ways in which
people in the local community have vigorously
opposed immigration and seen immigrants as a
scapegoat for economic ills. In other cases, people
simply remain unaware of the influx of new neighbors
and unaware of their needs, corresponding to the
general apathy of a community that has lost a way of
life and has found no replacement for it.
Posted by Sarah Monroe at 11:47 AM No comments: 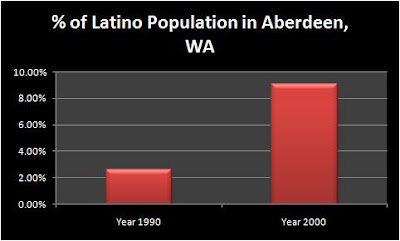 Posted by Sarah Monroe at 11:39 AM No comments: 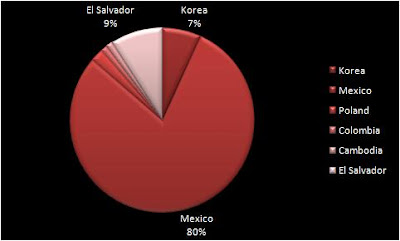 Posted by Sarah Monroe at 11:38 AM No comments: 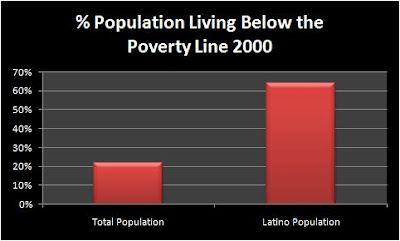 Posted by Sarah Monroe at 11:36 AM No comments: 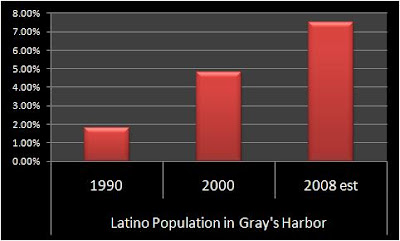 Posted by Sarah Monroe at 11:31 AM No comments: